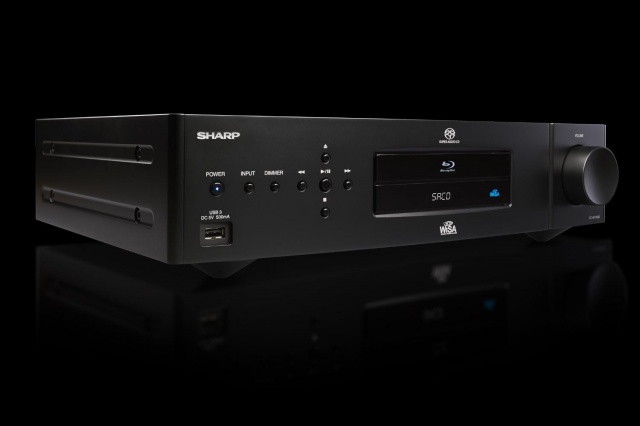 When most people think of Sharp, they likely think about really big TVs. However, in an effort to help you clean up your home theater, the company has been working on something even bigger than their TVs, and it’s finally ready for its coming-out party. Today, Sharp unveiled its new media player, which uses dual wireless technologies to transmit both high resolution audio and video without cables. Sharp calls it the Sharp High Resolution Audio Player, but the name doesn’t do the device justice — it’s way more than just a high-res audio player.

Sharp has been developing its futuristic new player, the model SD-WH100U, for years. In fact, we caught a glimpse of what this technology could do in early 2013 at CES, and the prototype version of today’s device thoroughly impressed, able to send crystal clear audio and video to a surround sound speaker system and TV that was virtually indistinguishable from a traditional wired setup.

Using the wide open spaces of the 5.2-5.8 GHz frequency band, the player is able to transmit high resolution audio at up to 24bit/96kHz from FLAC, WAV, and even DSD files over the up-and-coming WiSA (Wireless Speakers and Audio) standard. It also plays SACDs and Blu-rays, and thanks to an adapter that speaks the Wireless HD protocol, WiHD, it also sends top-notch 1080p HD video to any TV.

Of course, there’s a catch to the new system: In order to take advantage of the WiSA audio transmission, you’ll need an arsenal of speakers that are also WiSA compliant. And since WiSA speakers are also tasked with amplification duties, each speaker needs a power source — not always an easy accomplishment in a 7.1 setup, which is the extent of the player’s channel output. WiSA-ready speakers can be hard (and expensive) to come by right now, though a few premium audio companies like Band & Olufsen carry WiSA-certified speaker setups.

As an alternative, the company has developed the Sharp Wireless Bridge, which allows for pairing the system with a traditional amplifier configuration. But then you’ve got more speaker wires to deal with, and that kind of defeats the purpose.

And then there’s the price. The wireless bridge alone is priced at $1000, and the player will run you a large-and-in-charge $5k. Add in a similarly pricey set of WiSA-ready speakers, and you can imagine how quickly things could move into the stratosphere for users looking to go wireless with this kind of resolution and high-end performance at home.

In other words, much like OLED TVs now, and 4K TVs just a year or two ago, Sharp’s new player sits squarely in the early adopter column. But that doesn’t mean we aren’t seriously excited about this new technology. The prices on these systems will be dropping sharply (no pun intended) in the next few years. And best of all, the WiSA and WiHD tech really works.

Related: Hands on with Polk and Definitive Technology multi-room speakers

Imagine a future not far from now in which everything in your system is plug-and-play, no setup necessary besides a power source. In theory, it would auto-adjust to your room, play tunes at CD-quality resolution or greater from your phone, and send out high resolution audio and video all from a single component. Master of the home theater, with no strings attached. Today’s announcement from Sharp is the first major stride towards that not-so-far-away standard.

If you’re looking to be a part of the future now, you can do so soon, as players are now shipping to retailers nationwide. The company will also be showing off its new player, alongside its brand new THX Certified 4K/UHD TVs at events in Scarsdale, NY and Santa Monica, CA at Value Electronics and Video & Audio Center respectively. For more info, follow the list of the basic specs for both the High Resolution Audio Player, and the Wireless Bridge below.